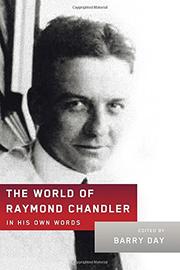 THE WORLD OF RAYMOND CHANDLER

In His Own Words

Day (The Letters of Noel Coward, 2007, etc.) lets peerless mystery writer Raymond Chandler reveal himself through his own words—and in those of his fictional creation Philip Marlowe—while contributing structure, comment and a useful amount of connective tissue.

For someone so associated with the American patois, it is ironic that Chandler generally thought of himself as a classically educated “Englishman” imbued with British tastes. Day demonstrates how the Chicago-born author, a resident of England for much of his youth, had to “learn American just like a foreign language,” both customs and vernacular. Chandler was taken with the pungency of American English, admiring how it “roughed up” and enlivened the language, as Shakespeare had done. Day then shows how character, language and style superseded plot in Chandler's fiction, unlike such shallow avatars of construction as Agatha Christie. Though a man of comparatively modest literary output, Chandler mused extensively on writing in letters to colleagues and friends. Day connects Chandler's signature ideas and impulses most effectively in this correspondence. While he disclaims biographical intent, such elements abound in the book. Chandler was repatriated to Los Angeles in 1912, and the city would become as much a character in his novels as Marlowe, his alter ego. Foremost, Chandler was a sultan of similes. Delightful as they often are, however, Day drowns us in a deluge of them. Like Chandler, Day also betrays a faint whiff of condescension toward American culture—not without some justification—but he is wholly sympathetic in charting Chandler's long, happy marriage to a woman 18 years his senior, his devastation over her death and his accelerated alcoholism.

Chandler wrote not about crime or detection, as George V. Higgins observed, but about the corruption of the human spirit. Day deepens our understanding of how Chandler, who cared for his legacy, balanced commitment to principle with living and prospering in the real world.