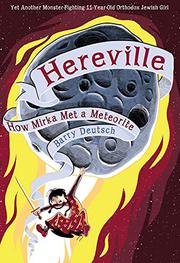 HOW MIRKA MET A METEORITE

From the Hereville series, volume 2

Hooray! The charmingly imperfect Mirka returns to battle a miming meteorite (How Mirka Got Her Sword, 2010).

Still grounded after her last adventure, Mirka wriggles her way out of her house arrest after an important game of chess with her stepmother, receiving from her a message of things to come: "[W]hen you have to make a decision, imagine the person you want to become someday. Ask yourself, what would that person do?" After another encounter with the witch and the multilimbed troll of the first book, Mirka finds herself stuck with a sapient meteorite that has assumed her appearance. What seems like a great idea (just think: They can split chores!) quickly sours when she finds herself missing meals and time with her family. When Mirka decides she’s had enough, she challenges Meteorite Mirka (known as Metty) to an epic battle that will take brains—not brawn—to win. Watching Mirka fight the seemingly perfect version of herself is riveting. Deutsch has created a wonderful world in Mirka's insulated Orthodox village and continues to capture it adroitly—though he has left himself enough room to blast Mirka out to space without readers batting an eye. Mirka is unflinchingly likable because she is so tempestuous and inexact, and really, who can’t relate to that?

This truly clever series is lots of fun. (Graphic fantasy. 8-13)