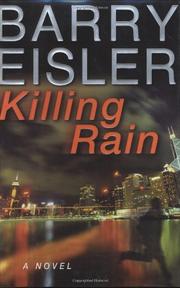 “Killing isn’t the hard part . . . Christ, an ape could do it. Getting close to the target, though, that takes some talent.” Rain has that talent in abundance, especially when the death has to look natural. Here, he’s hired by the Israelis to extinguish a national who is selling his designer-bomb-making talents to terrorist networks. The hitch is that the target may be a CIA asset, and the Israelis don’t want to incur the agency’s wrath, so they need an unaffiliated party to do the job. But Rain’s best-laid plans unravel when a child enters the assassination scene—he won’t harm women or children—and the Israelis come stalking him, afraid he’ll expose their intentions and anger their American benefactors. The action sequences are straightforward, with plenty of nitty-gritty tactical material for those who enjoy special ops work, while Eisler never clutters his story with red herrings or circuitous plotlines. Still, for the first time in any extended fashion, he makes Rain take stock of his vocation. He kills truly heinous figures for a living, but he starts to wonder why his solutions always involve violence. His brand of nihilism is beginning to taste like ashes in his mouth, and the line is blurring between his acts and those of the madmen he’s hired to whack. Eisler doesn’t burden the story with these musings, but lets them pass like a veil over the action. And plenty of good action there is, involving Rain’s old friends Dox, his ex-Marine sniper friend, and Delilah, the honey-pot agent for the Israeli secret service, both returning to give Rain even more of a human face.

A thriller as straight as an arrow, even when mildly deflected by the winds of conscience. The ending leaves much unanswered, so, thankfully, expect more Rain.