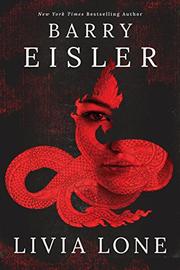 An explosive thriller that plunges into the sewer of human smuggling.

Billy Barnett picks up Livia Lone in a bar, figuring her for an easy, like-it-or-not lay. But she’s set up this known predator and kills him. She is a Seattle sex-crimes cop who secretly murders scum the legal system hasn’t sufficiently punished. “She respected the system…and if the system didn’t get them [victims] justice, she would get them justice another way.” After this brisk opening, we plunge into Livia's back story. In Thailand her parents sell 13-year-old Labee and her 11-year-old sister, Nason, who become separated on arriving in the U.S. in a shipping container. Labee is adopted and renamed Livia, becoming the sex slave of prominent businessman Fred Lone. At school she befriends Sean, who stutters and capably defends himself against bullies. Their friendship leads to her learning jujitsu and judo, skills that come to help define her, end her abuse, and end many men’s lives. One scene, not unique, goes from “he was between her naked legs” to “His eyes rolled up, his tongue flopped loose, and his body went limp on top of her.” And she’s plenty smart enough to keep her name out of any investigations and not leave any traceable patterns. Livia determines that “she was never going to be ruled by fear again.” As an adult she becomes a cop in a Seattle PD sex crimes unit so she can hunt monsters who sexually abuse children “and put them in prison forever. Or else put them in the ground.” Over the years she never stops trying to find out what happened to Nason, an insatiable desire that’s a driving force in the plot. Eisler (The God's Eye View, 2016, etc.) writes sex scenes that are intense and disturbing, and the villains deserve all the pain Livia Lone can inflict.

Filled with raw power, this may be the darkest thriller of the year.