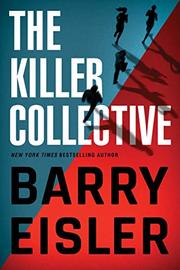 A secret internet site called Child’s Play features videos of horrible sexual abuse and torture of children. Feds suspect members of the Secret Service may be participants, but their investigation is inexplicably shut down. Meanwhile, John Rain specializes in “services” that appear to have natural causes, but he turns down a hit job on Livia Lone because he doesn’t kill women or children. Livia is a sex-crimes investigator for the Seattle PD and has a ferocious hatred for the world’s “freaks and predators.” Born in Thailand and originally named Labee, she was sold by her parents to the Lone family in Idaho, where she suffered unspeakable abuse. Now she works on both sides of the law, putting creeps in prison when she can—but “the only thing better than a rapist in prison was a rapist in the ground.” She has secretly killed at least a dozen of them, and she joins forces with professional killers such as Rain to bring down Child’s Play once and for all. The most interesting of the bunch are Dox, who helped Livia kill a child molester in Thailand and would “kill a whole lot of people” to protect her, and Delilah, the blonde Mossad agent who uses her body as well as her gun. One of their threats is Oliver Graham Enterprises (OGE—“you couldn’t spell rogue without O-G-E”), which wants to fight America’s wars and incidentally kill John Rain. The stakes may go even higher than “six active pederasts in the Secret Service” as the story reaches its bloody crescendo. It is rich in backstory, though it can stand alone. Still, Livia Lone (2016) is the ideal introduction to a sympathetic, damaged, and vengeful character.

Vicarious pleasure for anyone wanting to see the scum of the world get its due.