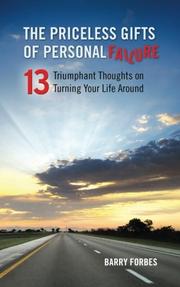 THE PRICELESS GIFTS OF PERSONAL FAILURE

Thirteen Triumphant Thoughts on Turning Your Life Around

Forbes’ debut weaves together anecdotes, quotations and straight talk into a Christian-oriented self-help guide addressing the concept of failure.

Forbes opens the book with an image of a person standing in front of a horrific prison to illustrate his concept of hell on earth, which he defines as “nothing more than a lifetime of unfortunate choices that are usually made early and often.” He then dives into the concept of a “useless life”—a life without love, meaning or a desirable future—and how easily readers may stumble onto such a path. A person can avoid such a fate, the author asserts, by taking responsibility for failures and using them to address behaviors, such as selfishness, that can prevent him or her from achieving a meaningful life. While these simple messages aren’t particularly new, that doesn’t make them less insightful. The self-help genre may have a reputation for using feel-good platitudes to boost readers’ self-esteem, yet this book takes a different tack than many, as it sensibly urges readers to acknowledge their shortcomings before doing something about it. Many people instinctively know they must accept personal failure to move past it, but it can help to hear such advice from someone else. That said, this guide is by no means a magic remedy for life’s ailments; readers who aren’t serious about self-improvement, as well as some non-Christian readers, may not get as much out of it.

An engaging guide to learning from failure aimed at readers seeking to improve the quality of their lives.