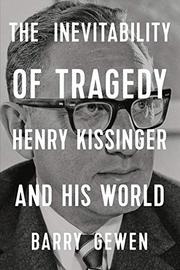 THE INEVITABILITY OF TRAGEDY

Masterly work on the making of Henry Kissinger—and what American foreign policy can learn from his dark experience and pessimistic outlook.

In this deeply thoughtful, meticulously researched work, longtime New York Times Book Review editor Gewen looks at both Kissinger's life experiences—e.g., his teen years as a Jew in Bavaria living under Nazi persecution—and his assimilation of the academic work of fellow German Jewish intellectuals Leo Strauss, Hannah Arendt, and Hans Morgenthau as he steered American statecraft in the 1970s. While Kissinger is considered by some as criminal, even evil, for his advocating for the overthrow of Salvador Allende, the democratically elected leader of Chile, and other dispassionate realpolitik decisions as secretary of state under Richard Nixon, Gewen takes a more philosophical approach to his subject, delving into the reasons behind Kissinger’s coolheaded "assessment of power" and refusal to be swayed by "high moral principles like self-determination or national sovereignty.” Because he was hounded by the Nazis during his youth, Kissinger recognized the "realities of power" and, through his own father’s “powerlessness,” began to believe that “weakness…was synonymous with death” (as he wrote near the end of World War II). Kissinger was deeply influenced by the work of Strauss and Arendt, who "opposed tyranny but nursed a deep suspicion of democracy and majoritarian processes,” and became a colleague to Morgenthau, who eschewed traditional moralistic certainties for an approach based more on “incrementalism and perfectionism,” “stability rather than justice,” and “the less bad rather than the unqualified good.” In this well-measured, beautifully written book, Gewen thoroughly considers each facet of Kissinger's evolution and how his choice of "less bad" became his modus operandi—e.g., the "Christmas bombing" of North Vietnam at the end of 1972, forcing Hanoi to the negotiating table—ultimately tarnishing his elusive, urbane legacy.

Gewen has used the distance from events to refine his research into an elegant, elucidating study of comparative statecraft.