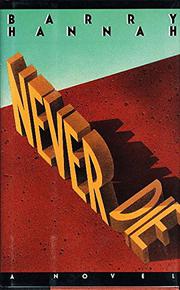 ``Never Die'' is Barry Hannah's ninth book (Geronimo Rex, Airships, Ray, The Tennis Handsome), a surreal Western filled with his trademark literary effects—non sequitors, zany behavior, smutty dwarves, characters who come and go like meteors—and his usual disdain for the reader's attention span. ``What kind of pompous scrivener would leave this thing locked up under glass, title up? He must have an enormous strutting idea of his life and times,'' thinks the dwarf regulator Smoot. That about sums up this book: no plot; rather, a montage of familiar Western images, themes, and characters come at the reader with the blinding intensity of a strobelight. One moment we're in the mind of Fernando Mure, consumptive alcoholic gunfighter, who dreams of burning down the town of Nitberg; the next moment, we're with Judge Nitberg, who employs Smoot to bash Mure's knees with a spade and spy on ancient rival Navy Remington; then it's off on a tour of the demented mind of the Judge's daughter, Nandina, who hankers strangely after Fernando. If this summary suggests coherence, then it must be emphasized that the subject here seems to be language in all its strong, gaudy, and hallucinatory forms. Imagine a kinky Louis L`Amour, a Wild Western ``Twin Peaks'', ``The Old Gringo'' blended in a Cuisinart with Tom McGuane. After a disspiriting string of works that seemed to be recycling old material, ``Never Die'' is one of Hannah's better efforts in years—not for mass consumption, certainly, but pleasing to literary gameplayers.