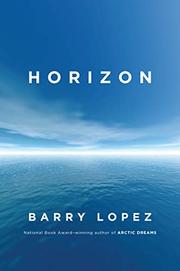 “Traveling, despite the technological innovations that have brought cultural homogenization to much of the world, helps the curious and attentive itinerant understand how deep the notion goes that one place is never actually like another.” So writes the author, who has made a long career of visiting remote venues such as Antarctica, Greenland, and the lesser known of the Galápagos Islands. From these travels he has extracted truths about the world, such as the fact that places differ as widely as the people who live in them. Even when traveling with scientists from his own culture, Lopez finds differences of perception. On an Arctic island called Skraeling, for instance, he observes that if he and the biologists he is walking with were to encounter a grizzly feeding on a caribou, he would focus on the bear, the scientists on the whole gestalt of bear, caribou, environment; if a native of the place were along, the story would deepen beyond the immediate event, for those who possess Indigenous ways of knowledge, “unlike me…felt no immediate need to resolve it into meaning.” The author’s chapter on talismans—objects taken from his travels, such as “a fist-size piece of raven-black dolerite”—is among the best things he has written. But there are plentiful gems throughout the looping narrative, its episodes constructed from adventures over eight decades: trying to work out a bit of science as a teenager while huddled under the Ponte Vecchio after just having seen Botticelli’s Venus; admiring a swimmer as a septuagenarian while remembering the John Steinbeck whom he’d met as a schoolboy; gazing into the surf over many years’ worth of trips to Cape Foulweather, an Oregon headland named by Capt. James Cook, of whom he writes, achingly, “we no longer seem to be sailing in a time of fixed stars, of accurate chronometers, and of reliable routes.”

Exemplary writing about the world and a welcome gift to readers.