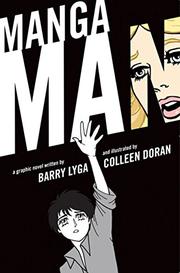 A daring piece of graphic-novel meta-fiction explores the tropes of manga versus Western comics.

Marissa is a stereotypical popular high-school girl: pretty, well-liked and girlfriend of Chaz, the hottest guy in school. But when she first lays eyes on Ryoko, a manga character who travels through “the Rip” into her world, she abandons the formulaic constraints that defined her. Ryoko helps Marissa see that her world, though very different than his, is still boxed in by panels, and that, like him, she is a character in another universe. Even as he plays with literary inventiveness, Lyga keeps the story accessible with the doomed and forbidden love between Marissa and Ryoko. Those familiar with both Western and Japanese comics will delight at the little nods to the respective conceits in those formats. For example, when Ryoko slams a volleyball in gym class, a fellow classmate exclaims, “Watch your speed lines!” In complement to Lyga’s clever meta tone is Doran’s highly stylized black-and-white art, seamlessly melding both the Western and Japanese comics aesthetics. While the innovation runs high in this tale, the story itself and the nuances of the character’s relationships is less agile, though the energetic creativity behind it easily keeps the lesser aspects afloat.

An inventive offering, sure to please fans of both American and Japanese comics. (Graphic fiction. 13 & up)