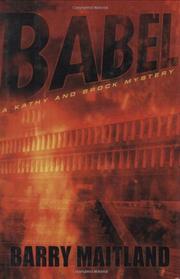 The shooting of a controversial prof in front of horrified witnesses reunites shaky DS Kathy Kolla, sidelined after the traumatic showdown of Silvermeadow (2002), with Chief Inspector David Brock.

Even before his arrival at the University of Central London East, philosophy professor Max Springer, long an antagonist of the tyranny of scientific rationalism, had added religious fundamentalism to his antipathies. At UCLE, where grieving Briony Kidd was his one and only student, he found both enemies conveniently lodged together in Professor Richard Haygill’s Center for Advanced Biotechnology, a showcase research lab staffed almost entirely by Islamic scientists and technicians. Though Springer’s outspoken courting of new antagonists makes the field of suspects rich, Kathy and Brock soon identify his probable killer. But when the suspect is murdered himself while in police custody, it becomes increasingly obvious that he was only the gunman for a higher-up playing a deeper game. Was it Springer’s nemesis Haygill, one of the Middle Easterners with whom he’d stocked CAB-Tech, the leaflet-mad head of the micro-cabal Islamic Action, or one of the Muslims who’d broken away from the Shadwell Road mosque to form a more radical community? For all the insults hurled back and forth, the truth, as usual in this taut series, is uglier and more devious than most readers can well imagine.

Maitland has always been a notable spinner of mysteries, but his fifth case continues to extend his range, depth, and mastery into Ruth Rendell territory.