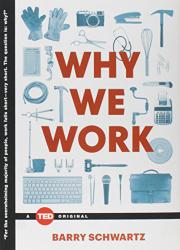 Schwartz (Psychology/Swarthmore Coll.; The Paradox of Choice: Why More Is Less, 2003, etc.) begs to differ with Adam Smith—it’s not simply wages that keep people working.

Despite what we may have thought or been taught, it takes much more than just money to incite us to keep our noses to the grindstone. For worthwhile labor, writes the author, financial self-interest is not the sole answer. There are also ethics, empathy, and judgment on the job. Integrity often beats cash incentives, and a bad occupation can be transformed by integrity into good work. The dream of work allied with ethos is certainly not new, despite the efficiency of the assembly line perfected by Ford so many decades ago. The success of that way of doing things eventually became undeniable, but a better ideology, one that recognizes worker satisfaction, autonomy, and purpose, can become reality too. Schwartz argues that there can be profitable businesses in which employees thrive and maintain standards beyond cash. He prescribes, nevertheless, above-market wages (it makes employees feel valued) and job security, decentralized decision-making, and increased training applied to various fields including education, health care, and law. In other words, we require a revision of much of human nature. The author cites numerous social scientists, management gurus, and efficiency experts, and he revives venerable anecdotes—e.g, the tale of the wise hospital custodian who cleans a room twice rather than agitate a patient’s parent—to light the way. Schwartz’s TED book, less than 100 pages, grew out of his latest TED talk, and while it contains a decent number of intriguing nuggets regarding the intersection of work and happiness, his argument requires further fleshing out.

A call, in a few pointed words, for an expanded, genuine work ethic.