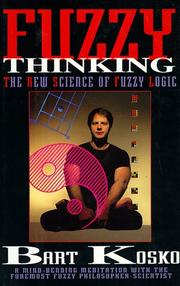 The New Science of Fuzzy Logic

Aristotle is out and Buddha is in; the law of the excluded middle (either A or not-A) is repealed, and A and not-A together replaces it. No more black and white, right and wrong, true or false. In their place come shades of gray, more or less, maybe so, maybe not. Why? Because the new world of fuzzy logic more closely mirrors reality, has a rigor all its own, and is paying off in the marketplace. Kosko (Electrical Engineering/USC) has been called the ``St. Paul'' of fuzziness, and for good reason: Not only has he contributed major theories and proofs in the development of fuzzy logic, but he's also been a major proselytizer and gadfly, organizing conferences and frequently going on the road (which usually leads to Japan). He's also young...which may account for the passion and posturing that color the text. Indeed, until Kosko gets down to chapter and verse on what FL is and how it works, reader will be put off by the constant put-down of Western logic and philosophy and opposing schools of computer science. But when Kosko is good, he's very, very good. One comes away from his text with a real understanding of the concepts of fuzzy sets, rules, and systems, and of how they're applied to make ``smart'' machines, devices, trains, and planes. He's also good in extending these ideas to neural nets in hypothesizing how brains change, learn, get smart. But toward the end, he plunges big time into metaphysical questions about life, death, cosmology, God (seen as the math- maker). Curious about the future, Kosko says that he'll opt for freezing at death. Still, for all the self-indulgence, probably the best primer around for learning what FL is all about, certainly cuts above Daniel McNeill and Paul Freiberger's Fuzzy Logic (p. 45).