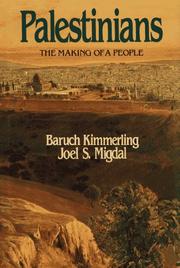 The Making of a People

Incisive, often wrenching history of the Palestinians, by Kimmerling (Sociology/Hebrew Univ. of Jerusalem) and Migdal (International Studies/Univ. of Washington). The present status of the Palestinians is a media mainstay, but their history is less well known. Here, Kimmerling and Migdal contend that a Palestinian national identity—like that of most nations—has been forged during the last two centuries, primarily by three events: the brutally quashed 1823 revolt against Egyptian overlords; the revolt against British rule in 1936-39; and the Intifada against Israel, which began in 1987. Starting in the late 19th century, agricultural advances made by Jewish farmers, mechanization, a cash economy, and reliance on world markets marginalized Palestinian farmers. Many became laborers, and, during British rule, an increased deterioration of village life created a landless underclass. The 1936-39 revolt resulted in the exile of the main indigenous Palestinian political institution, the ayan—a group of families that had produced leaders since Ottoman days- -leaving the Palestinians, at the birth of the Israel, without leaders or spokespeople. Between 600,000 and 750,000 Palestinians- -half the population—became refugees, their land taken over by Israelis. And those who stayed, the authors say, became second- class citizens, shunned by other Arabs. Since then, Palestinian efforts to form a political structure have been tied intimately to the goal of gaining a homeland. Kimmerling and Migdal detail the rise of the PLO and the Intifada, which occurred when Palestinians realized that the increasingly harsh occupation of the West Bank would not be temporary, and that they once again were in danger of being pushed aside by Israeli settlers. This revolt has resulted in a fervent sense of community among Palestinians—but also in declining income. A detailed report that provides much-needed context to the Arab-Israeli debate.