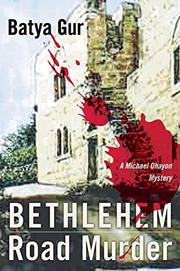 In Gur’s Jerusalem, some Jews hate Jews more than they do Arabs.

When Chief Superintendent Michael Ohayon of the Special Crimes Unit finds the brutally murdered body of a once-beautiful Yemenite girl, awkward questions inevitably arise. Bleak and bitter as they are, they’re not new to him. Racial hostility between the largely black Yemenites and the largely white Ashkenazim is a fact of Israeli life that has its roots in misunderstanding, mistrust, and the kind of ethnic myopia enlightened Jews would love to consign to history. Now, Zahara Bashari lies lifeless, her face smashed beyond recognition by someone who clearly hated her. But is the killing ethnic? True, she was outspoken, publicly passionate, even militant on behalf of her origins. On the other hand, the police pathologist reveals that she was four months pregnant, an argument in support of a more personal motive. Risk-taking Zahara was such a lightning rod for deep-seated emotions of every kind that Ohayon and his volatile special cops—a team that finds bickering as natural as breathing—confront a suspect list rich in possibilities. As usual, the investigation is more hit or miss than purposeful, but in the end justice is served in Ohayon’s own style.