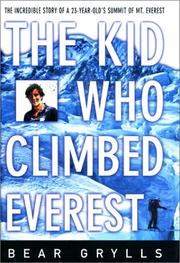 THE KID WHO CLIMBED EVEREST

The Incredible Story of a 23-Year-Old’s Summit of Mt. Everest

Another stone added to the growing mountain of Everest adventures.

Newcomer Grylls was serving in the British army in 1996 when he suffered a parachuting accident that left him with three broken vertebrae and a badly bruised spinal cord. In the months of physical therapy that followed, this avid climber rekindled a childhood dream to climb the world’s tallest peak—a feat that very few mountaineers younger than 30 have ever managed to pull off. “Everest is no place to prove yourself,” the author admits. “The likelihood of reaching the summit is so slim that you’re inevitably setting yourself up to be disappointed.” Even so, he talked his way into a slot on a 1998 British expedition led by a tough-as-nails ex-Marine commando who urged his teammates through the icy, windswept hells that Grylls describes quite effectively. For instance, he tells us that one area of Everest, the Icefalls, is so named because great spears of ice break off the sun-warmed slope in mid-afternoon, sharp and heavy enough to kill anyone standing “deep within the jaws of the overhang”; his account of the party’s race across the region is a fine set piece that doesn’t compare at all badly to the best Everest narratives. Against all odds, the author endured the Icefalls, the Lhotse Face, and other challenges the mountain threw up along the way, eventually arriving at the aptly named Death Zone, where, hyperventilating, he communed with the body of Rob Hall (whose death stands at the dramatic heart of Jon Krakauer’s 1997 account, Into Thin Air) and then took the summit—all at the tender age of 23.

Occasionally breathless and clunky, this is a vivid and inspiring read all the same, sure to find a large audience among outdoor-adventure and climbing buffs.