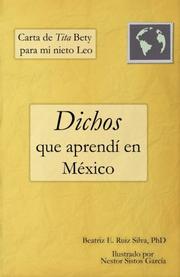 Ruiz Silva offers a children’s collection of dichos, or Spanish-language sayings, alongside explanations and illustrations.

In a series of Spanish-language letters to her grandson, who lives in an English-Spanish bilingual household, Ruiz Silva shares lessons gleaned from common adages in her native Mexico. These sayings, along with jokes and double entendres, were among the ways that people in her environment imparted information about appropriate behavior, she writes. Many of these have English equivalents, if not exact translations; the Spanish phrase “God helps the person who gets up early” means roughly the same thing as “The early bird gets the worm,” for instance. There are also equivalents of “Eat to live, don’t live to eat,” “Don’t air your dirty laundry in public,” and “Not everything that glitters is gold.” Many sayings are prescriptive, encouraging thoughtful decision-making, mindful eating, and an upbeat attitude. Animal themes also populate these pages: “The sleeping shrimp will be taken with the tide,” warns a saying on assertiveness. Another advises that “He who kills the cow sins as much as he who holds the hoof,” meaning that facilitating of a misdeed is as much of a sin as participating in one. Some sayings border on crude; for example, Ruiz Silva hilariously offers “no comment” on maxims such as “Never show your money or your backside” and “Never share your partner or your pistol.” In a postscript, she addresses her grandson directly with this disclaimer: “There are also sayings that are inappropriate, misogynistic, or vulgar. Following those is not recommended.” Ruiz Silva also offers her own advice, urging her grandson to eat well, sleep, read, and exercise daily, and strive for excellence. Overall, her interpretations of dichos are subtle in their moral instruction. Spanish-speaking children will find this text accessible and instructional, as will kids learning Spanish as a second language. The book’s design, which features more than a dozen small illustrations by García, could have been tailored better to young children with full-page images and less exposition. There’s no reason why the book couldn’t have addressed curious children in general rather that Ruiz Silva’s grandson specifically.

An amusing kids' book that reveals the wisdom behind Spanish adages.

THERE’S A FROG IN MY THROAT!
by Loreen Leedy
Children