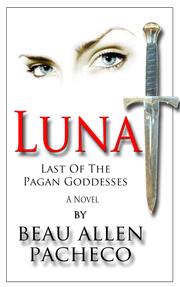 Last of the Pagan Goddesses

The Roman goddess of love pays a visit to Cleveland.

The goddess Luna has the duty of uniting long-lost lovers, a task she carries out with a vengeance. Luna herself was once mortal and still grieves for her own lost love, the Roman soldier Annaeus Antonius. Her memories of Annaeus draw her to an antique store in Cleveland, where she finds and purchases the dagger he carried with him to war. To her delight, she also identifies the woman behind the counter, Marisa Forte, as a candidate for her divine attention. Marisa has stayed single despite countless blind dates, in part because she’s still overcome with memories of the one boy she loved with all her heart: David St. John, a high school superstar who joined the Navy after college and then dropped out of sight. Luna sets out to find David and discovers that he’s now serving as a pilot for the CIA. In Reno, she appears to David and tells him she’s going to help him reconnect with Marisa so that they can live happily ever after. After getting over the initial shock of a goddess appearing in the cockpit, David, who shares Marisa’s fond memories, agrees to the wild romantic plan. The quirky, sometimes bizarre story is downright earthy, yet strangely endearing, as it weaves the modern-day love story with flashbacks to Luna and Annaeus’ ancient love and tragic ending. Pacheco’s writing can sometimes become erratic, yet the characters are likable and impressively three-dimensional—except for Nino, the “nice” Mafia hit man, who’s a bit hard to swallow. The plot is often heavy on coincidences, but divine intervention has a history of shaping love and life as it wants.

A fun, light read brightened by a splash of mythology.