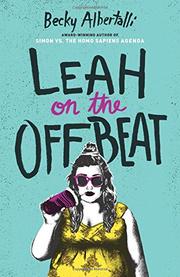 LEAH ON THE OFFBEAT

From the Simonverse series, volume 3

Leah Burke is perched on the precipice of change in the final months of senior year, before everyone in her diverse friend group scatters off to become their college selves.

Leah, Simon Spier’s best friend in Simon vs. the Homo Sapiens Agenda (2015), takes center stage in this sequel. She knows she’s bisexual, but she’s only out to her mom, not her friends, not even to Simon, who is gay. Leah’s cynical and socially awkward but also confident in herself. She’s unapologetically fat. She’s a talented artist and a ripper on the drums. She’s also fierce when called for. When a white friend implies that their classmate Abby Suso only got accepted to her college because she is black, Leah, also white, calls out her bias directly (Abby is not present for this conversation), sparking a nuanced subplot on racism and white allyship. Mostly, though, senior year is characterized by Leah’s aching crush on Abby, the oh-so-beautiful and oh-so-straight girlfriend of Leah’s good friend Nick. When the prom-scene ending finally arrives, even the most Leah-worthy cynics will be rooting for her. With complex characters, authentic dialogue, and messy-but-beautiful friendships, this sequel is more than capable of standing on its own.

A subversive take on the coming-of-age romance that will leave readers feeling like witnesses to a very special moment in Leah’s life and filled with gratitude for sharing it.