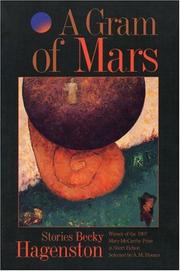 A GRAM OF MARS

paper 1-889330-22-1 A debut collection, mostly focusing on families and family relations, that was awarded the 1997 Mary McCarthy Prize in Short Fiction. Family life takes on unusual permutations in Hagenston’s world, where people commonly find that their desire to be left alone forces them into someone else’s arms—or clutches. The title piece, for example, depicts a grown-up daughter watching helplessly as her father slowly cracks up over the remarriage of his ex-wife and the sale of their house. In “All the Happiness in the World,” a woman who stole her ex-roommate’s boyfriend looks on with some discomfort as the same woman now marries an accountant on the rebound. “Till Death Do Us Part” portrays a young daughter’s increasingly jaded attendance at her restless mother’s many successive weddings, while the even more blatantly comic “Fugue” offers us another daughter’s recollections of her obsessive father (who locks himself away for years while building an organ in the attic of his house). “Holding the Fort” describes the discomfort that overtakes a young woman who returns to her childhood home (while her parents are away on vacation) after the breakup of her marriage. Eerie and affecting, the story’s written in an evocative style (“She feels as if she’s rooting around for some trapdoor into the life she’s supposed to be living now; single, footloose and fancy-free, that sort of thing”) that’s present throughout the collection but employed to best advantage here. A nice beginning: Limited in scope but attentive to detail, Hagenston’s stories draw the reader easily into a world that is deceptively familiar—only to show how little anyone knows about it.