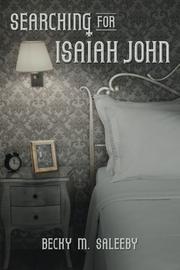 In Saleeby’s debut novel, an easygoing schoolteacher in 1969 Alaska promises to find an elderly neighbor’s missing son; it’s a quest that shapes three years of his life.

A transplant from Southern California and a proud Japanese-American, Jacob Tao finds fulfillment everywhere he goes. He loves the outdoors, adores his students and surrounds himself with quirky locals, most of whom treat him with great respect. But after his neighbor Lydia has an accident, Jacob’s carefree lifestyle is challenged when he starts searching for Isaiah John, her adopted son. Isaiah fled his mother’s house many years ago, and Jacob struggles to pick up the trail in the vastness of rural Alaska. As he gradually closes in on Isaiah, his own life changes: He questions his relationship with his demanding girlfriend, learns about the hardships facing indigenous Alaskans, and evaluates his interactions with his mother and grandmother, who survived Japanese internment camps during World War II. The story’s pace is slow, and much of the dialogue is stilted. Overall, however, this rigorously researched novel is rich in detail, offering a vivid tour of Alaska between the 1920s and ’70s. Although ethnic identity is a major theme, Jacob’s background never seems to hinder him. The mystery of Isaiah unfolds gradually, inspiring Jacob to travel throughout the state and even take a job in a remote village. By the time he learns the full truth of Isaiah’s origins, the plot takes unexpected turns: Although he reaches a new understanding of what makes him happy—namely, a free-spirited artist named Ruby—he also strays into a moral gray area. Many scenes lack dramatic momentum, but Saleeby takes her time exploring a locale that most readers will never visit. Her version of Alaska is dense with family history, and as the seasons slowly unfold, so do those genealogies.

A slow-paced but ultimately rewarding book that offers just enough mystery to keep readers’ attention until the sentimental finale.