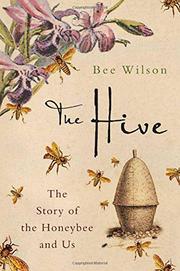 The Story of the Honeybee and Us

Honey is one of life’s luxuries and, for the author, one of the great natural foods: “as varied and splendid as olive oil, as consoling as chocolate, as flavorsome as garlic, as health-giving as fruit, as wholesome as bread.” It also provides Wilson, a research fellow in the history of ideas at Cambridge University, with much food for thought. She muses about our prehistoric run-ins with honey, imagining what it was like when Paleolithic humans first supplemented their severely simple fare with wild honeycombs. She especially likes to trace the emblematic connections between humans and bees through history. From ancient times, bees were admired for being wise, social, pious and industrious. Feudal apologists could point to workers admiring their king, even if they got the monarch’s gender wrong. The Renaissance took the bee to heart for its selfless industry, particularly useful for driving home the message that social order came from harmonious, uncomplaining labor. Republicans liked social unity in the state as well, so the beehive symbolism worked for them, too. In addition to her intelligent survey of political iconography, Wilson presents much excellent history both social (the special significance of the hive for Freemasons, who prided themselves as builders) and religious (the Christian view that the flame of a beeswax candle represented Christ, the light of the world). She tenders gobs of goodies regarding honey’s link to the mysteries of sex and, while she claims the book is no entomological work, also offers a wealth of natural science in these handsomely illustrated pages.