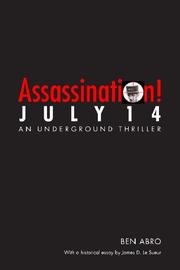 Editor James D. Le Sueur, a historian of modern France, resurrects this so-so thriller as grist for his scholarly mill. He makes an elaborate (and tediously long) case for the importance of the work, first published in 1963 by two English students studying in Paris, Robert Silman and Ian Young. Their alias (Ben Abro) partly came about because they knew just how libelous their novel was: they mixed enough fact and fiction to accuse a prominent former prime minister of participating in a plot to assassinate de Gaulle. Though few readers at the time understood how much was real and how much wasn’t, a former Resistance hero, Jacques Soustelle, was named in the book as a key player, a liberal who became a rabid defender of French colonialism in Algiers, and a mortal enemy of his former ally—de Gaulle. Soustelle sued in English court (LeSueur quotes endlessly from these transcripts in his essay), but eventually abandoned the action. The significance of Assassination! July 14 is inflated both as history and fiction. True, it does predate the more famous version of a similar plot, Day of the Jackal, by eight years, but so what? Forsyth’s potboiler is hardly a benchmark in literary history; nor do Silman and Young seriously revise the espionage genre in any meaningful way, despite the editor’s silly claims. At best, a historical curiosity, and even then, LeSueur still doesn’t sort out fact from fiction.