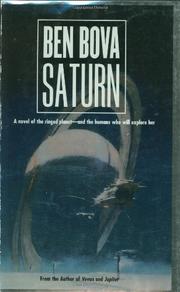 Another in Bova's series about humanity's expansion into the farthest reaches of the solar system.

The giant space habitat Goddard blasts off for Saturn; aboard are ten thousand assorted scientists, pioneers, and criminals—the latter mostly people who ran afoul of the repressive, fundamentalist New Morality, which dominates Earth, and now have a chance to make a fresh start far, far away. Chief executive James Wilmot, however, has a secret agenda. Astro Corporation boss Pancho Lane's sister Holly, cryogenically frozen, revived, cured of cancer, has a new personality, a photographic memory—and a painful crush on swindler Malcolm Eberly, who plans to rule the habitat along with New Morality fanatic Ruth Morgenthau and ruthless security chief Leo Kanaga. Soon, Eberly has everyone under surveillance and is plotting to declare a state of emergency and rule by fiat once elections are disposed of. All he needs is a way to impose his will on Wilmot. Meanwhile, stuntman Manuel Gaeta unwittingly distracts the scientists: he intends to be the first man to walk on Saturn's huge moon Titan—but Titan, you see, has native life-forms that must not be endangered or contaminated. Also, unknown to Holly, Pancho has ordered Gaeta to keep an eye on her. As Eberly’s influence grows, though, he finds it more and more difficult to restrain the sometimes-lethal ambitions of his associates.

Bova (Jupiter, 2001, etc.) keeps things ticking over with professional skill, but overall there aren't enough surprises to raise this adventure much above routine.