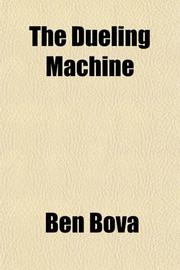 Professor Leoh's dueling machine allows combatants to take out their aggressions in fantasy. No one is supposed to actually get hurt. But then the heads of the government of Acquatainia expire after dueling with a strange Major from another, more hostile galaxy. It seems that Major Odal has an interesting telepathic ability which he puts to deadly use in the machine. Leoh frantically tries to stop him with the help of a bumbling but lovable Star Watchman named Hector. Hector is a mathematical genius who can barely take two steps without tripping. And it is he who will eventually have to face Odal in a wild psychic shootout. As usual Ben Bova's stories have stellar qualities . . . and they're fun.