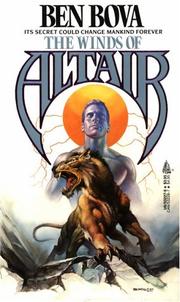 THE WINDS OF ALTAIR

Another demonstration of that currently popular sci-fi moral — man should clean up his own world before attempting to colonize others. The debate over whether girls will be allowed to participate in the telepathic experiments, and Jeff's father's objections to his harmless crush on an older woman scientist ("twice your age. . . and she's black") shows that the imagination at work here is purely technological. The spotty story does have some poetic moments when young Jeff, as part of a plan to establish remote control over the wildlife of Altair VI, slips into the consciousness of a giant six-legged wolf cat and roams the surface of the dark, methane-enveloped planet. Hovering above the planet in the interstellar ship Village Jeff's elders are planning to convert Altair VI to an earth-like environment thereby destroying Jeff's alter ego Crown and all his kind. However, unlike Jeff, the adults just don't seem to have their hearts in their work.