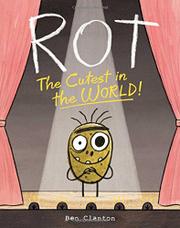 ROT, THE CUTEST IN THE WORLD!

A “mutant potato” with mottled skin and mismatched eyes enters a cuteness contest.

No sooner does Rot sign up than he’s bellowing out a song in anticipation of victory—until the sight of his rival contestants, an “itty-bitty baby bunny with fluffy, floppy ears,” a “little-wittle bewitching bewhiskered cuddly kitten,” and an “eenie-weenie pink and peppy jolly jellyfish” shakes even his self-confidence. Maybe if he dons bunny ears, whiskers, or a pink tutu? No, in the end he decides to go onstage as he is, show his better side (butt crack and all), and hope for the best. And, as the judging panel turns out to be composed entirely of moldy fruits, he struts off with a huge shiny trophy. Clanton includes potato stamps among the various media he uses to create his simple cartoon illustrations, achieving compellingly scabrous looks for his main character and the judges. He also leaves it to readers to decide if the outcome is a case of cuteness being in the eye of the beholder or, as the “little-wittle,” etc., kitten mutters, evidence of a rigged competition.

The kitten has an argument, but readers would be hard put to find a decomposing spud with a more winning personality.