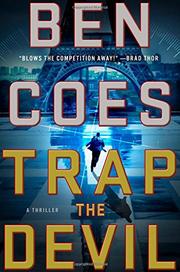 A former Special Forces operative uncovers the sinister plot of a group of powerful extremists hidden deep within the American government.

In Coes' (First Strike, 2016, etc.) latest, a new challenge is laid at the doorstep of elite government operative Dewey Andreas. With physical and emotional scars reminding Dewey of the lasting imprint of his previous missions, his sometime boss and longtime friend, CIA Director Hector Calibrisi, orders Dewey to visit a psychotherapist specializing in treating the acute stress of elite operators. As part of the treatment, and out of concern for the developing love affair between Dewey and his daughter, Hector sends Dewey on a seemingly benign assignment in Paris. However, sipping wine and taking walks along the Seine are removed from the agenda when an American diplomat is assassinated. Along with an array of intelligence specialists at the National Security Agency and the CIA, Dewey begins to suspect a larger plot that is connected back to an order from former CIA Director William J. Casey. The web of intrigue becomes increasingly complex when it appears that the figures pushing this plot are placed strategically in positions of leadership directly behind the president. To peel back the layers of deceit and treachery, Dewey must locate a mysterious woman who is intimately connected to the growing list of assassinations. In the meantime, an intriguing interlacing of narratives emerges as past and present enemies come together against Dewey and his team.

A very readable story which at times seems disconcertingly real.