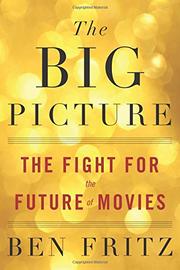 The Fight for the Future of Movies
by Ben Fritz
BUY NOW FROM
AMAZON
BARNES & NOBLE
LOCAL BOOKSELLER
GET WEEKLY BOOK RECOMMENDATIONS:

In November 2014, a cyberbreach at Sony Pictures Entertainment released thousands of emails. Wall Street Journal entertainment industry reporter Fritz (co-author: All the President’s Spin: George W. Bush, the Media and the Truth, 2004) believed that these emails/documents “could be the core of a much bigger story—one about the changes in Hollywood and why we get the movies we do.” He first focuses on Sony’s senior executives, financial records, and films, unveiling a new Hollywood in which “franchises and brands dominate, original ideas and stars are marginalized, and TV and film have swapped places in our culture and our economy.” Thanks to additional interviews, the author is able to bring us right into the Sony offices to listen to executives grappling with what film to make next, why the last one failed, which actors to pass over, and what they can do to make money for their investors. As Fritz shows, Sony made many bad decisions, and even though they did well with Spider-Man, Sony’s highest-grossing domestic release ever, they were late to catch the franchise train other studios were riding to the bank with the Avengers, X-Men, Iron Man, and Star Wars. Fritz shows how studios responded to the income drop in DVD sales brought about by internet piracy and the rise of Netflix and Redbox. The international market was exploding, and China, which had vast financial influence in the studios, was at the top. The author explores the “extraordinary” rise of Marvel studios, the rise and fall of many former A-list actors—Will Smith, Adam Sandler, Tom Cruise—and the stunning rise of TV’s smart series shows, like Breaking Bad, “better than anything most movie studios have made this century.”

Although the book sometimes bogs down under the weight of so much information, for those looking for inside scoops on the hidden relationships among movie studios, movie development, and choosing actors, this book is a treasure house.

APOCALYPSE ON THE SET
by Ben Taylor
Nonfiction