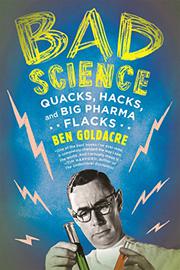 British National Health Service physician Goldacre shoots down what he considers to be quackery.

This updated version of the UK edition, published in 2008, begins with the statement, “Homeopaths are morons.” However, the author’s real targets are not proponents of alternative medicine—although he considers their remedies to be no more effective than “sugar pills”—but the ignorance of the vast public who are led astray by media hype and advertisers. The author writes the weekly “Bad Science” column for The Guardian, which, like the book, is intended to help people “who are angry about the evils of the pharmaceutical industry and nervous about the role of profit in health care.” While his dismissal of concerns about the use of MMR vaccine—an immunization shot against measles, mumps and rubella which many suspect may trigger autism in some children—are a bit cavalier, his purpose in writing is not to defend “big pharma” but to give the reader the tools to understand “how a health myth can be created, fostered, and maintained by the alternative medicine industry, using all the tricks on you, the public that big pharma uses on doctors.” This edition includes an account of a libel suit filed against Goldacre and The Guardian, which was settled (in his favor) in 2008. The author had investigated the nefarious activities of a group of big-money entrepreneurs who had spread a conspiracy theory in South Africa. In order to market vitamins as a replacement for antiretroviral therapy in the treatment of AIDS, they circulated the big lie that the pharmaceuticals not only did not retard the disease but were responsible for its spread. For Goldacre, it is these “journalists and miracle cure merchants” who undermine people’s understanding of the scientific basis for good medicine.

The author’s attacks on alternative medicine are often misguided, but he provides a valuable service in exposing the countless examples of bad science being perpetrated throughout the medical community and in the press.