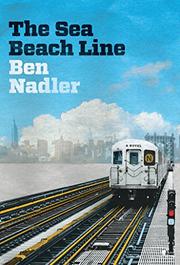 Stories both ancient and contemporary lurk beneath the surface of this New York saga of discovery and revelation.

Izzy Edel, narrator of Nadler’s (Harvitz, As to War, 2011) new novel, embarks on an odyssey of a peculiar sort after he's expelled from Oberlin for overenthusiastic use of hallucinogens. A cryptic postcard from Izzy’s long-estranged father, Alojzy, and a mysterious letter from someone named Semyon Goldov reporting that Alojzy is missing and perhaps dead—received two days apart—prompt Izzy to leave New Mexico, where his mother and stepfather had been providing him with rest and rehabilitation, for his father’s world of Brooklyn and downtown New York. Upon arrival in New York, Izzy undertakes to solve the puzzle of his father’s life or death. When he steps into Alojzy’s role selling books from a cart in Greenwich Village and takes up residence in his storage unit, the gritty realities of his father's hidden life are perplexingly revealed. Rayna, a fragile young woman with mysterious ties to a shadowy Hasidic sect in Borough Park, aids Izzy’s bookselling and detective efforts but hides secrets of her own. As more of Alojzy’s dubious business dealings are revealed, Izzy descends further into a world of questionable activity and finds that the answers to his father’s mystery are as complicated as the circumstances he finds himself in.

The confluence of a byzantine plot, intriguing references to Jewish folktales and the Talmud, and an epic storm results in an updated noir providing a glimpse of the Brooklyn and downtown Manhattan hidden from tourists and hipsters alike.