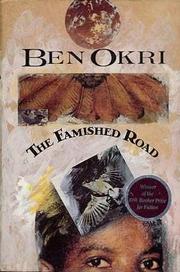 Like one of those populous medieval paintings of the Last Judgment, the African ghetto of the Nigerian-born Okri (Stars of the New Curfew, 1989), winner of the 1991 Booker Prize, not only teems with lives and spirits both sacred and profane, but contains profound truths—all described in rich, often lyrical prose. The narrator of this tale of life in a ghetto on the eve of independence is Azaro, a ``spirit-child'' who belonged to a group of spirit children who did not look forward to being born: they ``disliked the rigors of existence, the unfulfilled longings of the world, and the amazing indifference of the Living in the midst of the simple beauties of the universe.'' Tired of being born and dying so many times, Azaro chooses to live, perhaps ``because I wanted to make happy the bruised face of the woman who would become my mother.'' And live he does, but his name Azaro/Lazarus is not coincidental: he is constantly battling disease, disaster, and the spirits who try to recapture him. The ghetto itself is a harsh world of endemic poverty, crime, and political chicanery as local bullies vie to establish their political factions. Hovering in the background is the mysterious but helpful photographer; the enigmatic and powerful Madame Koto; and the malevolent blind singer, as well as a slew of good and bad spirits. Meanwhile, Azaro's parents' lives are a constant struggle; but as the election nears, Azaro's father enjoys a brief success, and in a subsequent vision proclaims that life is a road we're building that does lead to death but also to ``wonderful things'' for ``so long as we are alive, so long as we feel, so long as we love, everything in us is an energy we can use.'' There is at last a moment of serenity, and Azaro savors the sweetness that has dissolved his fears: ``I was not afraid of time.'' Long in the telling, like a great epic poem, Okri's tale is a beautifully rendered allegory, enriched by its African setting, of love powerful enough to defy even death and his minions.