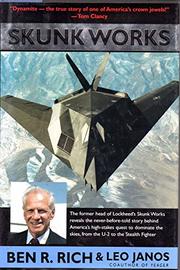 A Personal Memoir of My Years at Lockheed

A top-flight aerospace engineer's engrossing reminiscences of an eventful career in the service of the CIA and US military at the height of the Cold War. With a graceful assist from Janos (co-author of Chuck Yeager's best-selling 1985 autobiography, not reviewed), Rich offers an episodic (probably vetted) account of his nearly 40 years with Lockheed's Advanced Development Projects, an ultrasecret operation better known as the Skunk Works (a name borrowed from the Dogpatch still in Al Capp's ``L'il Abner'' comic strip). During his apprenticeship, the author (who headed ADP from 1975 until his retirement at 65 in 1990) helped design, build, test, and launch the U-2 and the SR-71 Blackbird, America's enviably successful spy planes. On his watch, the Skunk Works produced the first jet fighter-bomber to employ stealth technology, the oddly configured F-117A, which earned its wings in the unfriendly skies above the Persian Gulf. In addition to Rich's own recital, the text includes commentary from colleagues, intelligence agents, Pentagon brass, test pilots, and others, which puts the narrator's knack for advancing the state of the aerospace art into clearer perspective. While he accentuates the positive, the author does not shy from recalling certain of his unit's turkeys, including a remote- controlled reconnaissance drone that seldom returned from missions over enemy territory; an aircraft fueled by liquid hydrogen (whose explosive power could have blown its users to bits); and a stealth picket ship (eventually sunk by the Navy's missile frigate lobby). Nor does Rich fail to settle old scores with, among others, pols more concerned with their next election than national security. Not one to hold a grudge, however, he closes with some uncommonly sensible suggestions on how US taxpayers could get more bang for their procurement buck in the parlous times ahead. An insider's accessible, informative take on what's needed to get futuristic hardware to contemporary flight lines and launching pads. (8 pages b&w photos, not seen)