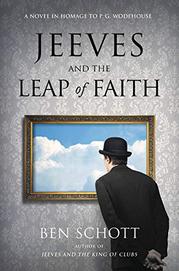 JEEVES AND THE LEAP OF FAITH

A Novel In Homage To P.G. Wodehouse

A second Jeeves novel authorized by the Wodehouse estate.

What humorless monster doesn’t love the Jeeves books? These confections feature the English aristocrat Bertie Wooster getting himself into the soup and Jeeves, his “gentleman’s gentleman,” fishing him out again. In a typical story, Bertie gets engaged to the wrong girl, offends a muscular and irascible gentleman, attempts to extricate a pal from a jam, steals a policeman’s helmet or a piece of antique silver as ugly as it is valuable, runs afoul of a stern aunt, and insists on wearing an objectionable garment, and then, with a modest flick of the wrist, Jeeves sets everything right again. Only 11 Jeeves novels and a few dozen short stories are what Bertie might have called the genuine article—written by P.G. Wodehouse himself—but the estate has authorized Schott to expand the canon, and this is his second outing. True to form, Schott’s Bertie spends his time dodging undesirable would-be fiancees, arriving late to meals with Aunt Agatha, masquerading as a clergyman, and climbing the walls of Cambridge University buildings while Jeeves manipulates everything and everyone toward a happy resolution. The greatest pleasure of Wodehouse’s Jeeves books lay in his wordplay: the delicious contrast between Bertie’s breezy Jazz Age slang and Jeeves’ precise formality. Wodehouse’s Jeeves knows more than you do about pretty much everything, but he never needs to show off; it’s part of Wodehouse’s genius to make the reader feel smart. Schott, alas, does the opposite. Unlike Jeeves, who appears at the narrator’s elbow to supply the mot juste exactly—and only—when it’s needed, Schott opens his reference library and shakes it upside down over the text. Schott inserted an element of espionage into his first Jeeves novel, and he continues it here, raising the stakes slightly, which may or may not be what readers want from a Jeeves novel.

It's agreeable enough, but Schott is no Wodehouse.