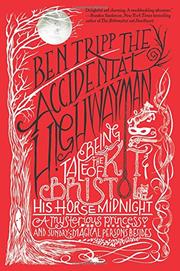 Being the Tale of Kit Bristol, His Horse Midnight, a Mysterious Princess, and Sundry Magical Persons Besides

While the aging George II rules Britain, young Kit Bristol enjoys respectability as a gentleman’s servant, a step up from his past as a wandering circus trick-rider—until his mortally wounded master reveals himself as a notorious highwayman and bequeaths to Kit his magnificent horse, his golden sword, the ferocious enmity of the law and a mysterious mission to kidnap a runaway Faerie princess. Soon, Kit (along with a mad impresario, two fair damsels, the horse Midnight, the baboon Fred, and a brace of wee glowing feyín) is up to his ears in intrigue, disguises and daring escapes, pursued by the armies of two kings, a foul duchess and “[g]oblings and trolls and whatnot.” Kit’s wry voice provides a fine pastiche of old-fashioned tale-telling, slightly hampered by the sprinkling of didactic footnotes but enlivened by breakneck pacing, colorful similes and a sly wit aimed at modern sensibilities. While the lovely Princess Morgana, alas, does little but look pretty, act feisty and need rescuing, the rest of the characters are delightfully over-the-top, and Kit himself is as brave, clever and good-natured an orphan lad as ever buckled a swash. The promise of more adventures to come provides happily-ever-after enough.