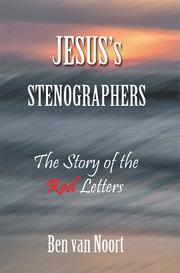 A scholarly argument that aims to demonstrate the historical authenticity of the accounts of Jesus’ life in the Gospels.

According to debut author van Noort, most academic theories regarding the composition of the Gospels presume that they are corrupted in some form—by the act of translation from Aramaic, by the interpretation of a confused oral tradition, or by the personal agendas of the writers themselves. In each case, he notes, faithful Christians find themselves in a “deplorable situation” in which the accuracy of biblical accounts of Jesus’ speeches and deeds is irremediably suspect—which, in turn, undermines modern Christianity itself: “In a modern transparent society, it is necessary that Christians develop a clear vision of [the Gospels’] origin. It is no longer appropriate to come up with obscure theories concerning the center of the Christian faith: Jesus and his words.” However, the author offers a competing alternative: the documentation theory, which contends that Jesus was followed around by “speedy writers and stenographers” who chronicled his ministry, ultimately creating a public record from which the Gospel writers could draw. On the basis of an impressively close reading of the prologue to the Gospel of Luke, the second chapter of the letter to the Hebrews, and the beginning of the first letter of John, among various other sources, van Noort persuasively argues for the existence of such “note-takers.” These figures are rarely discussed in explicit terms, he says, because their work was seen as a “mere mechanical activity.” As a consequence, he says, theories about oral traditions are simply unnecessary, as are criticisms of the translation of Jesus’ teachings from Aramaic—as, the author contends, Jesus almost certainly communicated in Greek.

Van Noort’s command of the biblical, theological, and even linguistic material in this book is simply magisterial, and he provides an accessible, as well as intellectually fair, presentation of regnant theories. The author makes clear that he’s motivated by his own devout Christian beliefs—he believes the stenographers’ recordings were written with a care that was inspired by the Holy Spirit—but his study is unfailingly rigorous. Also, the implications of his thesis, if correct, are wide-ranging, not only for biblical exegesis and historical dating, but for canonicity, as well. Overall, van Noort’s work is astonishingly concise given that it covers an extraordinary breadth of territory. For example, he not only attempts to establish the contemporaneity of the Gospels, but also to repudiate the existence of the “imaginary” Gospel Q while providing several interpretive illustrations of the consequences of his theory along the way. He even synopsizes the Latin and Greek stenographical tradition. Readers may find all of this to be a bit dizzying at times, and it can also be highly speculative; for example, the author argues that there’s more than one Gospel because each was created as a “teaching record” for each writer’s disciples. Nevertheless, this book manages to offer a rare combination of originality and scholarly meticulousness.