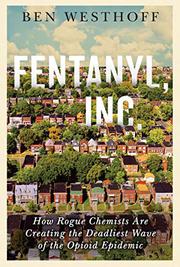 How a lethal synthetic opioid and its manufacturer is creating a global drug addiction crisis.

In 2013, investigative journalist Westhoff (Original Gangstas: Tupac Shakur, Dr. Dre, Eazy-E, Ice Cube, and the Birth of West Coast Rap, 2016) began researching potently addictive street drugs, and he learned about Fentanyl and other “novel psychoactive substances” while writing about “why so many people were dying at raves.” The author describes Fentanyl and synthetic drugs (including K2 and Spice) as formerly medically sound panaceas whose formulas were hijacked and re-created with unpredictable potencies and physical effects. The staggering statistics he presents tell a much darker tale, as he shows how Fentanyl-laced cocaine and other new psychoactive substances are killing thousands of people. In order to uncover the origin of the epidemic and the epic race to develop effective deterrent systems, the author seamlessly blends past and present in his profiles of Belgian chemist Paul Janssen, who was responsible for Fentanyl’s initial development in 1959; police officers; politicians; LSD drug kingpins, and St. Louis street dealers. While promising, the harm-reduction initiatives remain diluted beneath the shifting weight and influence of political red tape, global capitalism, and the biological and psychological bondage of drug dependency. Perhaps most compelling is Westhoff’s undercover infiltration of several rogue Chinese drug operations. Some operate covertly, while others are blatantly transparent since China offers subsidies to companies manufacturing and distributing Fentanyl components. Also fascinating is the author’s charting of Fentanyl’s circulation from darknet marketplaces to overseas postal stops to regional distribution. While international interceptive efforts like “Operation Denial” have helped in the apprehension of the upper echelon of major distributors, they have failed to collar Fentanyl trafficking network kingpin Jian Zhang, who is believed to be largely responsible for the steady flow of the drug into the global market. Drawing material from official reports, drug databases, scores of interviews, and years of personal research, Westhoff presents an unflinching, illuminating portrait of a festering crisis involving a drug industry that thrives as effectively as it kills.