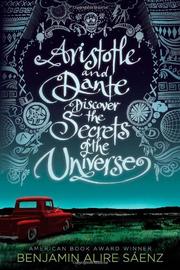 ARISTOTLE AND DANTE DISCOVER THE SECRETS OF THE UNIVERSE

A boring summer stretches ahead of Ari, who at 15 feels hemmed in by a life filled with rules and family secrets.

He doesn't know why his older brother is in prison, since his parents and adult sisters refuse to talk about it. His father also keeps his experience in Vietnam locked up inside. On a whim, Ari heads to the town swimming pool, where a boy he's never met offers to teach him to swim. Ari, a loner who's good in a fight, is caught off guard by the self-assured, artistic Dante. The two develop an easy friendship, ribbing each other about who is more Mexican, discussing life's big questions, and wondering when they'll be old enough to take on the world. An accident near the end of summer complicates their friendship while bringing their families closer. Sáenz's interplay of poetic and ordinary speech beautifully captures this transitional time: " 'That's a very Dante question,' I said. 'That's a very Ari answer,' he said.… For a few minutes I wished that Dante and I lived in the universe of boys instead of the universe of almost-men." Plot elements come together at the midpoint as Ari, adding up the parts of his life, begins to define himself.