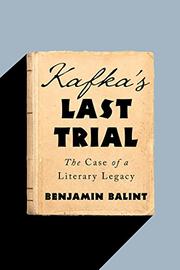 The Case of a Literary Legacy

The Kafkaesque story of who owns Franz Kafka’s manuscripts.

Journalist and translator Balint (Research Fellow/Van Leer Institute; Running Commentary: The Contentious Magazine that Transformed the Jewish Left into the Neoconservative Right, 2010) seeks to explain to literature lovers the convoluted story of what happened to Kafka’s manuscripts and papers after his death in 1924. The first chapter of this legal/literary history takes place in an Israeli court, where three parties, including 82-year-old Eva Hoffe, are fighting over some Kafka manuscripts. In order to better understand the complexities of the case, Balint provides the compelling backstory. It’s famous knowledge that Max Brod, who had a “fanatical veneration” for his beloved friend, was ordered by Kafka to destroy all of his writings after he died: “Everything I leave behind…is to be burned unread and to the last page.” Brod, however, “preferred to act as a self-appointed literary executor rather than as literary executioner.” By doing so, he twice rescued Kafka’s legacy, once from fire and once from “obscurity.” As World War II was breaking out, Brod, a passionate Zionist, escaped from Prague to Palestine with a “bulky, cracked-leather suitcase stuffed with loose bundles and leaves of Kafka’s manuscripts.” Esther Hoffe served as Brod’s secretary and close friend in Israel for more than two decades. When Brod died in 1968, he had already written a will in which he “gifted [her] all the Kafka manuscripts and letters in my possession.” Assuming the materials were hers, she sold some over the years, including the original manuscript of The Trial, at public auction. When she died in 2007, she willed the manuscripts to her two daughters, Eva and Ruth. During a few trials after that, an Israeli court finally awarded—fair or not—the manuscripts to Jerusalem’s National Library.