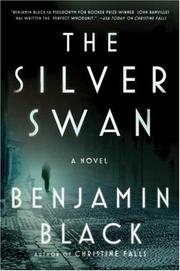 From the Quirke series, volume 2

Graham Greene made a distinction between his literary endeavors and the trifles he called “entertainments.” Some fans may wonder why he bothered: Entertainments such as The Third Man, though not in the league with, say, The Heart of the Matter, rank with his most popularly enduring work.

John Banville has taken the distinction a leap farther, establishing a new identity for himself as Benjamin Black, a writer of stylish mystery thrillers separate from his literary work, such as the Booker-winning The Sea (2005). Christine Falls (2007), the debut by Black, reached a readership that might have had no acquaintance with Banville’s previous novels, though the author otherwise has made no attempt to disguise his identity. The book jacket—complete with photo—informs that “Benjamin Black is the pen name of acclaimed author John Banville.” Now Black is back a year later with The Silver Swan. The follow-up is a more compelling mystery than its highly praised predecessor, but it depends on familiarity with that earlier book for full enjoyment. The protagonist again is a Dublin pathologist named Quirke, a character who isn’t exactly a hero and is certainly no detective—he’s as clueless as he is curious. In fact, Quirke is something of a mystery, certainly to the reader, likely to himself. Much has changed. Quirke no longer drinks, he has lost the love of his life and he is estranged from the daughter who was far more affectionate toward him before she knew Quirke was her father. Again, Quirke finds his curiosity piqued by the corpse of a young woman. Again, Quirke feels like he has stumbled upon a secret concerning her death, only to discover that he has it all wrong. Among the differences between Black’s novels and Banville’s is that the former have more dialogue and, particularly in The Silver Swan, more sex—tawdry rather than titillating. Though Black writes some beautiful sentences and seems in love with the sound of words, his style lacks the almost Joycean rapture that some critics of Banville find excessive. Banville plainly enjoys writing the Black novels, and it will be interesting to see whether the style of the mysteries begins to influence his more literary work. For the distinction might well be an arbitrary one. Long after Dashiell Hammett and Raymond Chandler transcended the stigma of generic pulp for literary legitimacy, novelists such as Dennis Lehane, George Pelecanos and the underrated David Lindsey continue to obliterate the line between mystery and literature. And the greatest of all mystery writers could well be Dostoevsky.

Whether he’s writing as Black or under his own name, Banville knows that the past pervades the present, that the human condition is the ultimate mystery. And that death is either a period or a question mark.