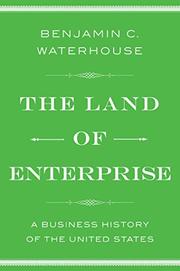 THE LAND OF ENTERPRISE

A Business History of the United States

A historian makes his case that the story of private enterprise has been undervalued as a window into the history of the United States.

In a summary of American history that is simultaneously chronological and thematic, Waterhouse (History/Univ. of North Carolina; Lobbying America: The Politics of Business from Nixon to NAFTA, 2014) discusses the commercial aspects of slavery, the rise of factories in the U.S., the development of an impersonal corporate structure for business, battles between government regulators and business executives, and the rise and decline of labor unions, among other threads. He expands on the oft-repeated 1925 quotation of President Calvin Coolidge: “The chief business of the American people is business. They are profoundly concerned with producing, buying, selling, investing and prospering in the world.” Pointedly referring to the 2008 financial crash in the U.S. and around the world, the author argues that the business history of this country has provided cautionary lessons either ignored by or unknown to the general public. Even during the late 1700s, as the Founding Fathers were forging the Constitution, warring factions debated the role of government in the business realm: should it protect domestic producers or allow foreign producers to undersell American businesses? In each of his 12 chapters, Waterhouse offers a variation of his message that business history constitutes the overarching influence of the nation’s history, but the narrative suffers from cramming too much information into a relatively compact overview. The author notes that not all Americans favored a smooth path to the capitalism that ultimately prevailed, with dissenters concerned about exploitation and oppression of both laborers and consumers. The chapter on the American brand of slavery as instrumental in the building of capitalism offers emotional heft in an otherwise mostly bloodless book.

Though plagued by repetition, the book offers persuasive reasoning to support the author’s thesis.