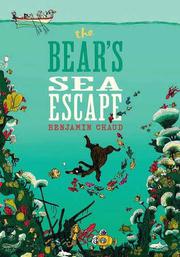 Papa Bear is once again in hot pursuit of Little Bear in this visually delectable, seek-and-find sequel to Chaud’s award-winning The Bear’s Song (2013).

It’s wintertime, and Papa Bear and his boy cub suddenly realize the snowy rooftop of the Opéra Garnier in Paris is no place to hunker down for the winter. The teddy-bear room of an elegant department store seems cozy enough, but while Papa Bear snoozes, a little boy decides to take Little Bear home. (All’s fine until he discovers “his new toy bear is more bear and less toy!”) When Papa wakes up, the chase begins. The oversize, elaborately detailed, color-saturated artwork effervesces with intriguing stories within stories, and it’s up to readers to locate Papa and his cub amid the glorious mayhem, from the city streets to a train to a cruise ship to a tropical island. The chase takes Papa Bear underwater with the whales and into a jungle, where he’s swept up in a conga line at a masquerade party! From atop a sumptuous banquet table, Little Bear trumpets his own tune for his beloved Papa Bear…and he is found. This story, first published in France as Coquillages et petit ours (2012), lacks some of the poetic playfulness and polish of the first book, but the charming, lavish artwork and the just-challenging-enough spot-the-bear game more than make up for it.

As charming as two bears can be.