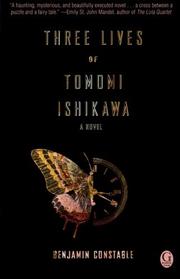 Tomomi, or Butterfly as she is nicknamed, and Benjamin like to hang out together in Paris and talk about their lives. They love each other but not sexually. Butterfly has episodes of anger fueled by frustration and depression but wraps them up with apologies and gets back to the love. One day, Benjamin receives a letter in which Butterfly tells him that by the time he reads it, she will have killed herself. He cannot believe she is really dead. Then he starts receiving emails from an unknown sender. The messages are said to be letters left by Butterfly in which he finds clues in a treasure hunt revealing more of Butterfly’s writings and describing some shocking things. Butterfly wants Benjamin to write a book about her life and death. The clues left in the ongoing treasure hunt take him from Paris to New York, where he meets Beatrice, who presents another mystery to be solved. Psychological, political and philosophical themes are suggested along the way, including the right of individuals facing long, painful deaths to hasten that ending on their own terms with dignity.

A haunting book as much about the creative process as it is about the characters.