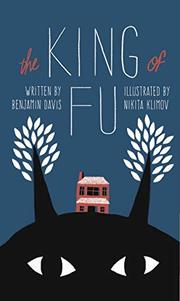 THE KING OF FU

Davis recounts the confounding pressures of his 1990s childhood in this debut memoir-in-verse.

When telling the story of your life, one might as well start at the very beginning. That’s exactly what the author does in this memoir, which he describes as “a thing like a very long lie to yourself.” Specifically, he tells of how “The White-Gloved Sheriff / kicked in the door / and / Pulled me” from his mother (whom he calls his “Supervisor”; he later calls her “the Computer Science Major,” “the Waitress,” and other occupational names). Unusually, he had horns and a lot of hair at birth, he says. He was immediately at odds with the people and other living things around him—his parents, his brothers, his family dog. As a toddler, he created an imaginary world for himself known as “FU,” which was “Filled with things that looked like me / And where things made sense / I was King.” His earliest years were characterized by horrible discoveries (school work, isolation, crushes, problems in his parents’ marriage), but his teen years proved to be an even greater series of highs and lows, involving confusion over geopolitical events, friends, computers, pornography, and marijuana. Like a novice who can’t quite figure out the rules of a game, Davis bumbles forward—all horns and fur and misunderstanding—inadvertently angering authority figures as he seeks an adequate method of self-expression. The poem is composed in short, direct lines, enjambed to emphasize particular words or phrases rather than establish a consistent overall rhythm. Davis’ idiolect is inventive in its names for things (siblings are “life partners,” pets are “prisoners,” teachers are “Part-Time Supervisors,” and so on), and his outsider’s observations of society are shrewd and often funny. However, the combination of snark and self-seriousness causes some poems to come off as petulant and cloying; as a result, it’s difficult to imagine anyone over the age of 22 finding the work emotionally affecting. Even so, the tone and style, coupled with debut artist Klimov’s truly engaging black-and-white illustrations should captivate readers of a certain anarchic mindset.

A nihilistic poetic remembrance that will appeal most to older teens and 20-somethings.