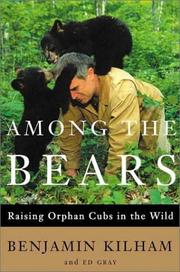 Raising Orphan Cubs in the Wild

The New Hampshire state wildlife department asked Kilham to adopt a couple of bear cubs six years ago. His work with those cubs, and a selection of other cubs from more recent vintages, are chronicled here. Kilham doesn't pose as an expert, and his writing is of the unvarnished variety, but he quickly and easily establishes himself as an observant individual who makes sensible comments upon the vast amount of fieldwork he has done. His plan was to “raise the cubs in as natural a set of circumstances as possible,” so that they might return to the wild. He frames this narrative as a story of their days together, he and the cubs, and lets the information slowly accrue before attempting any conjectures on the bears' behavior. He forms a very close bond with the cubs, but there is always that unpredictable quality to the bears that reminds Kilham and reader alike that these are wild creatures and that the ground we share is shaky with potential misunderstandings and palpable consequences. Kilham has got opinions about such traits as altruism (“thought by many to be solely a human trait,” but regarded by just as many as an established animal behavior), self-recognition, the use of tools, as well as everyday survival behavior such as food finding, all buttressed by copious direct observation. He has even discovered an organ in the bear's mouth, “probably to be known as the Kilham organ,” used to identify plant chemistry. Where he really shines, though, is in bear-sound interpretation, including a glossary of sounds from moans to “eh-eh” to “huh, huh, huh, huh, huh,” something you ought never hope to hear.

The kind of primary research that leads to those rare insights that come to be known as understanding. (8-page color insert, not seen)