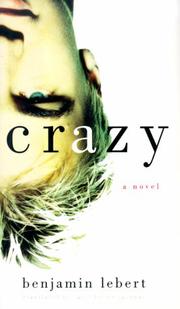 Shades of Holden Caulfield in the wicked city, on the lam from Pencey Prep.

That's pretty much the story of this already famous first novel by a German teenager (born in 1982 yet), which has inexplicably been hailed in his country's press as ``a thoroughly amazing and wonderful book'' (Der Spiegel). It isn't. It's the firstperson tale (narrated in present tense and in short, punchy sentences and sentence fragments) of a 16yearold disabled boy named ``Benjamin Lebert'' who is partially paralyzed—and, hence, understandably enough, an academic underachiever who is sent to boarding school (ostensibly to repeat ninth grade; actually to be protected from the spectacle of his parents' marriage collapsing). Benjamin might be a more engaging character if he and his schoolmates (including Fat Felix, depressive Troy, and Benjamin's romanticfool roommate, Janosch) were less generic and their ``adventures'' less derivative. A hopeful visit to a sex therapist, for example, falls woefully flat. A raid on the girls' dorm is both attenuated and thinly described (though Benjamin does lose his virginity). A willfully ``crazy'' afterhours trip to nearby Munich—where Benjamin and his pals bond with a clean old man who gets them admitted (quite unbelievably) to a strip joint—never manages to be as madcap as Lebert seemingly intends, because the boys' moony animadversions on the subjects of Life, God, and Sex are unfortunately both redundant and banal. Only very occasionally does an impudent insight rear its head (``Life's too complicated.''/``Yes, . . . but girls are hot''). If you keep reminding yourself its author is barely 18, Crazy becomes, barely, tolerable. The novel simply traverses ground we've been over too many times already and makes far too little of its protagonist's potential uniqueness.

Salinger's Catcher remains the gold standard. Crazy is only another imitation.