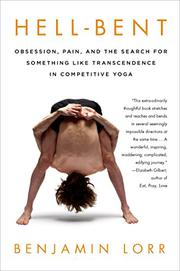 Obsession, Pain, and the Search for Something Like Transcendence in Competitive Yoga

A comprehensive examination of hot, competitive yoga, its cultlike following and the author's immersion into the practice.

Named for its founder, Bikram Choudhury, Bikram Yoga is a strict series of 26 postures performed in a heated room set to at least 105 degrees with 40 percent humidity. Lorr, a New York City high school teacher, started practicing at age 29, after dislocating a rib during a drunken fall. He was overweight, out of shape and depressed after a breakup. Within three months, he'd lost 45 pounds and felt he'd "discovered magic." At the urging of an instructor, he entered a local yoga tournament in which contestants are judged for their poses. His hobby grew into a full-blown obsession, and Lorr details his stints at back-bending retreats where he practiced yoga for 14 hours a day and "hallucinations, waves of tears, anger, and pulsing headaches are just a few of the many releases that occur as you work." During his expensive Bikram Yoga teacher training, guzzling massive quantities of water and sweating constantly, Lorr experienced 14-pound swings in weight loss from single classes. The author writes extensively about Choudhury's unusual life, total adherence to proper alignment and form and belief that pain can be good. Now a multimillionaire, Choudhury has garnered more than a few skeptics, in part for his seemingly self-serving behavior. Lorr interweaves his story with fascinating history and photographs; some of the most compelling parts of the book concern the stories of other practitioners, from famous athletes to former drug addicts, whose lives have been utterly transformed by hot yoga.