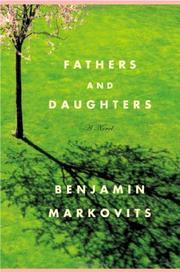 Markovits’s second novel (after The Syme Papers, 2004) is actually four long stories, linked by place rather than theme.

That place is an elite private school in the Bronx. Amy Bostick is a biology teacher there, a new hire straight out of college. She cries every night, though nothing much is wrong. (Markovits’s characters cry easily; this whole package begins and ends with tears.) Amy is “a daddy’s girl” and he’s far away in Indiana, but now she has a dazzling new boyfriend. While Daddy is visiting for Thanksgiving, he loses ten grand on a golf game—and starts sobbing—and Amy begins to view him as the light that failed. The second story focuses on one of Amy’s older colleagues, Howard Peasbody, a gay man with a young German lover, Tomas. When Howard was a student at NYU he had a drunken one-night-stand with a fellow student, Annie Rosenblum. Now, 20 years later, Annie writes him that he is a father; Annie has raised Francesca on her own. After a few pleasant meetings with mother and daughter, the constitutionally unhappy Howard breaks off their relationship and dumps Tomas too (there’s more crying and none of it rings true). The third and fourth stories give us Stu Englander, a senior English teacher, and one of his students, Rachel Kranz. Stu has a very fat wife, a “decaying mass” who spends a lot of time in bed. Stu had always wanted kids. He realizes just in time that his interest in pretty Rachel is more sexual than paternal. Hooray, because Rachel doesn’t need more grief; her parents are divorced and her old man (very old, at 76) is dying of brain cancer. We leave Rachel weeping at her graduation, but they are happy tears, for she has understood that she is “a child of love.”

A superficial work that glances at father-daughter relationships but has little interesting to say about them.