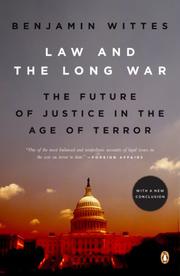 LAW AND THE LONG WAR

The Future of Justice in the Age of Terror

According to the current administration, from early on the fight against international jihadist terrorism was “a new kind of war” against “a different type of enemy” requiring military force, criminal and civilian law enforcement and covert actions, touching everything from immigration to banking to biomedical research and involving foreign police and intelligence agencies. Notwithstanding this early understanding, the Bush administration has chosen, instead, to manage the war almost purely as a military matter, relying on the president’s power as commander in chief to authorize any number of dubious practices pertaining to detention, surveillance, interrogation, transfer and trial of terrorist suspects. Outraged liberals decry the assault on civil liberties; conservatives marvel at their tender solicitude toward fanatics trying to murder us. Similarly, Wittes’s premise that the war on terror is real and requires vigorous prosecution will dismay congenital critics of the president, just as his call to curb executive authority will unsettle Bush supporters. Unsurprised that this or any president would push the envelope of executive authority in the aftermath of 9/11, Wittes persuasively argues that as a long-term strategy such a power grab is politically doomed. Nor can we safely rely on the Supreme Court’s piecemeal review of the president’s overreaching, placing military and security matters in the hands of the judiciary, the least qualified branch to deal with such issues. In an argument of paramount interest to specialists and in prose comprehensible for all (best illustrated by his discussion of the detainees at Guantánamo), Wittes insists that it is past time for Congress to take up its law-making responsibilities, to put an end to the predictable, largely unproductive confrontations between the executive and judiciary on a matter so vital to the country’s welfare.

So levelheaded and full of good sense, it’s almost certain to be ignored.