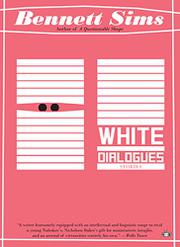 There are some clever literary stunts scattered throughout this collection, but there’s no doubting the inventiveness of the author’s prose, pacing, and ability to build tension and occasionally dispel it with laughter. The first entry, “House-sitting,” is a gothic nightmare in the vein of “The Tell-Tale Heart,” about a housesitter driving themselves insane with the specters of ghosts. “You keep thinking: you are living in the cabin of a madman,” writes Sims. “You wonder: how long can you live in a madman’s home without going mad yourself?” "The Bookcase" is a very meta exercise in which a mean-spirited scrap between neighbors becomes fodder for an episode of Ira Glass’ This American Life. “Ekphrases” is another experimental work, one that catalogs works of art completed at “the edge of death.” What seems to be a trifle in “Two Guys Watching Cujo on Mute” turns out to be some emotional stories traded between friends as the titular film plays out in the background. There’s a travelogue of monsters in “City of Wolfmen” and a Kafka-esque play on kaiju movies in “Destroy All Monsters.” Sims goes down the gothic horror road again in the two-pager “A Premonition,” which begins with the delicious line, “It was late and I was beset by a black wind.” There’s a final ghost story of sorts in “Radical Closure,” in which a writer ruminates on the nature of death. The collection ends with an eerie multimedia work that mashes up the film criticism of Lebanese author Jalal Toufic, images from the Hitchcock film Rear Window, and the spiraling madness of a film critic choking on his own critique. Touché.

A deft collection of spooky fables that pivots from classic stylings to postmodern irony.